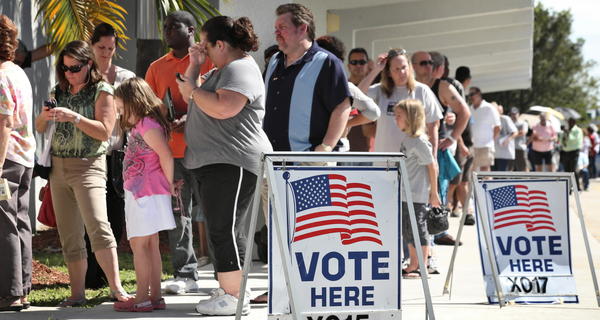 Today is Election Day in America. The few significant races being decided today along with the minor local and municipal questions will be a prelude to the larger battles slated for 2018 and 2020. Voters today will send myriad messages to established state and national leaders and officials.

My 16-year-old daughter will be watching from the sidelines, hopefully studying the issues and preparing herself for the first time that she will be able to go to the polls. When she does have the opportunity to cast a vote and exercise her hard-won constitutional right to add her voice to America, it will be during the most critical election cycle of the century. She, and millions like her, will hold the future of a democratic America in her young hands.

I like to think that as a young voter, she will consider carefully the issues facing the nation and the long-established values that the founders gave their lives to achieve. It is important that the new voters appreciate their fundamental basic rights to freedom of speech and religion; that they understand the critical nature of a free press to democracy; and that they hold their future leaders to standards of conduct commensurate with upholding and defending the constitution for all Americans.

Not only will my daughter be casting a vote someday, but she will have a duty and opportunity to serve the nation. I trust her to make sound choices and exercise good judgment as both a voter and a potential leader in America’s not-so-distant future. Despite her age, my daughter would make a better leader than anyone representing the White House under the Trump regime right now. Though she is a teenager — and thus often a stranger to me — consumed with her own agenda, I know that she would serve the nation in a way that a 70-year-old businessman is incapable of demonstrating.

She would be a better and stronger leader than Donald Trump because she has what Trump lacks: compassion and the moral development to differentiate between right and wrong. Like any teenager, she makes mistakes. However, she knows enough to accept responsibility for those errors and not cast blame on people who have nothing to do with her choices. At times, she is spoiled, but she would never take from someone less fortunate to fulfill her own personal needs and desires.

Sometimes she does not listen to me, or even acknowledge me. I am none-the-less proud of her for the person that she is and constantly expect that she will grow and learn — both of which provide her with traits that would make her a more reliable and competent resident of 1600 Pennsylvania Avenue than its present occupant.

My daughter is a better person and leader than Trump for the sole reason that she is capable of learning. Unlike Trump, who makes up facts and stories to camouflage his ignorance of issues, my daughter knows how to ask for help, open a book, search Google, or listen to others for advice and answers. These are the qualities of a true leader and president.

It is a blot on American history that the leader of the former greatest nation on earth is not capable of the achievements of a high-school student. Trump is stubborn, rude, ignorant, and most of all, unwilling to open his mind. He brags about his own greatness and flaunts his witlessness like a badge of honor, which it is not.

There was a time, back when he was sixteen, that Trump may have been qualified to be president. A half-century ago, when someone suggested that he run for political office, he may have been a different person — a young student, like my daughter, eager to learn instead of knowing it all. That is what makes my daughter more qualified than Donald Trump to be President of the United States, because if asked to run today, she would say to me, “Dad, I don’t know how.”

Instead of pretending she knew what she was doing for personal gratification, she would put a nation first and refuse a nomination before jeopardizing 325 million people. She would acquiesce to others with experience and abilities before she would try to be something she was not ready qualified to be. If the day comes that she does decide to run and win, she would still ask questions, listen to advice, and study the issues that perplex her. Unlike Trump, she would take the job seriously.

As Americans go to the polls today, many will blindly choose red or blue. Others will notice a sign or advertisement and remember a name. Before they swipe a screen or pull a lever, what every voter should be asking about candidates is, “Are they as qualified as my teenager?” If the answer is “No,” then it is time to find a candidate who is — regardless of party labels.